The Shanghai World Financial Center building in Shanghai China is the tallest building in the country and the second tallest in the world.  The 101 stories reach a height of 492 meters or 1,614 feet.

The World Financial Center is a mixed use building consisting of offices, a hotel, conference rooms and a spectacular observation deck that is open to the public.  The Park Hyatt Shanghai claims to be the highest hotel in the world.  Its 174 rooms are located on floors 79 thru 93.  Room rates at the Hyatt are also pretty steep! 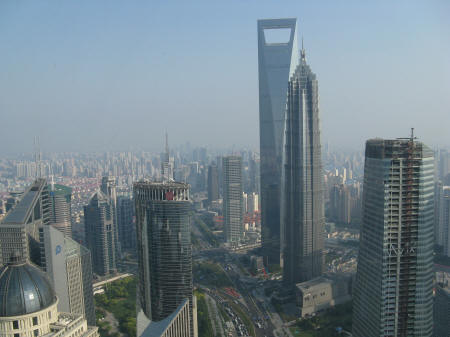 Due to the extreme pollution problems that frequently plague Shanghai, it is advisable to visit the World Financial Center on a reasonably clear day.  In general, weekend days are the clearest as many factories are either shut down or operating at a reduced capacity.  The morning after a heavy rain is also a good time for visibility.

The World Financial Center is one of Shanghai China's top tourist attractions.